Print
Fractures caused by osteoporosis are debilitating for sufferers and their families, can lead to premature death, and impose an enormous cost burden on society.

The most common fractures caused by osteoporosis are hip, spine, wrist and shoulder (humerus) fractures. Arguably, hip fractures are the most catastrophic for sufferers and their families, and are the most costly to the health system. About 4,000 people per annum suffer a hip fracture in New Zealand.

In 2007, Osteoporosis NZ commissioned The Burden of Osteoporosis in New Zealand report (BONZ). The BONZ report provided estimates and forecasts of the numbers of fractures in 2007, 2013 and 2020, and their associated costs. 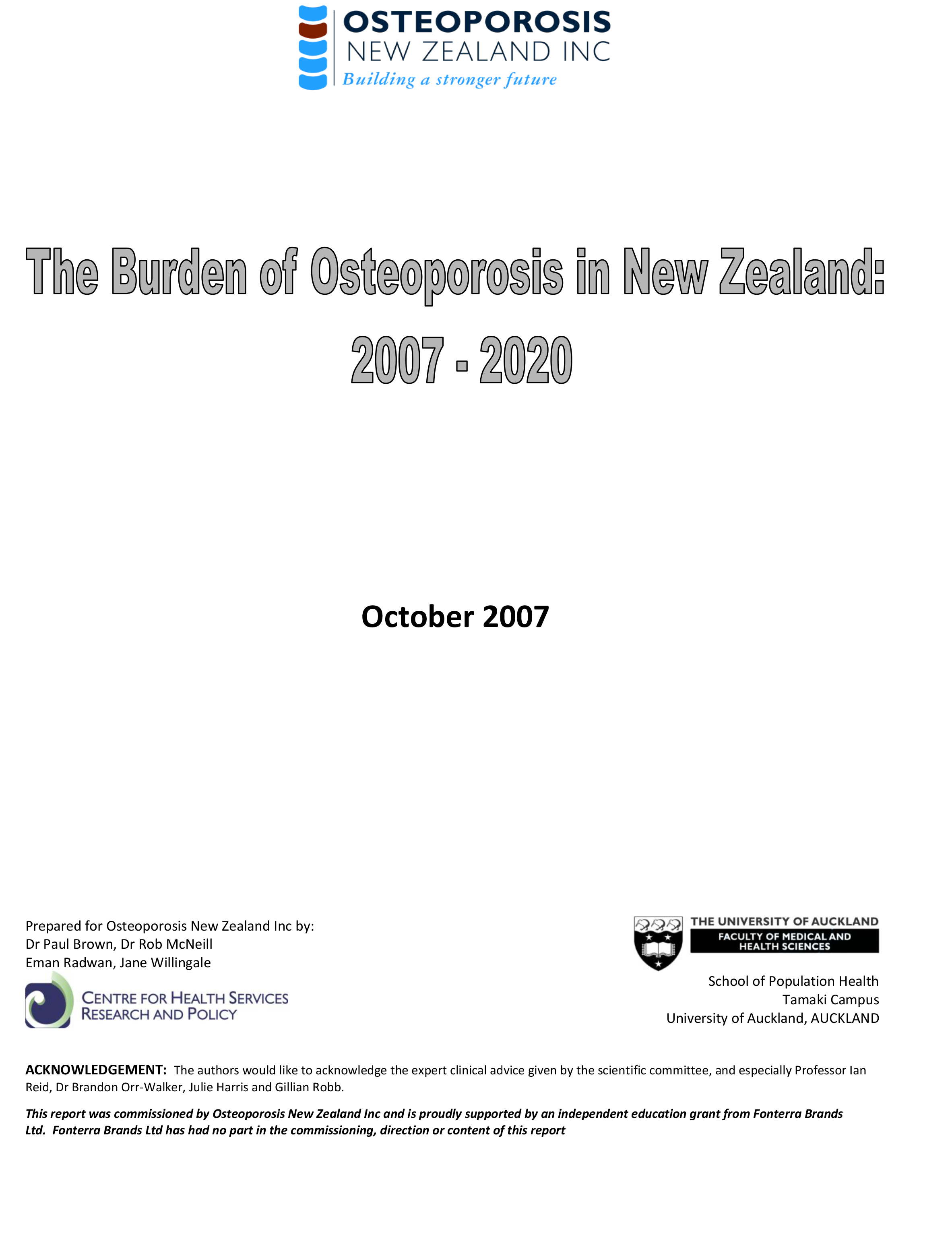 Key findings of the BONZ report are illustrated in the graphs below. The number of fractures caused by osteoporosis at all sites in the skeleton was expected to rise from 84,000 cases in 2007 to almost 116,000 by 2020. Based on costs in 2007 dollars, the direct costs for fracture care were expected to rise from almost $300 million in 2007 to $411 million by 2020. Conservative estimates of the rate of healthcare inflation would suggest the cost in 2020 will actually be around $580 million. 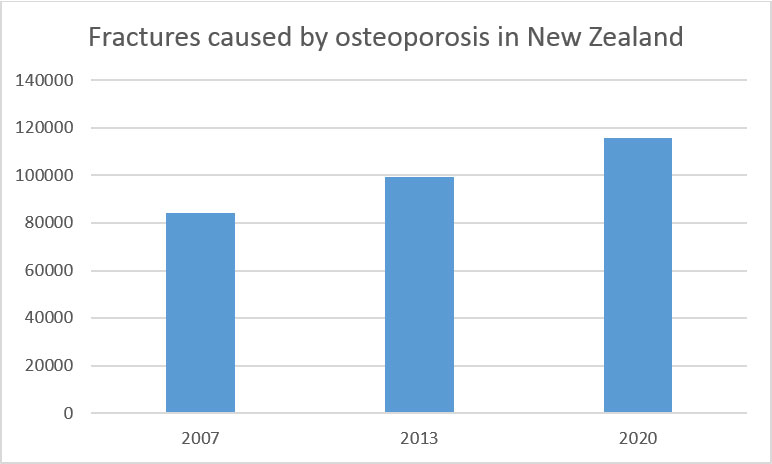 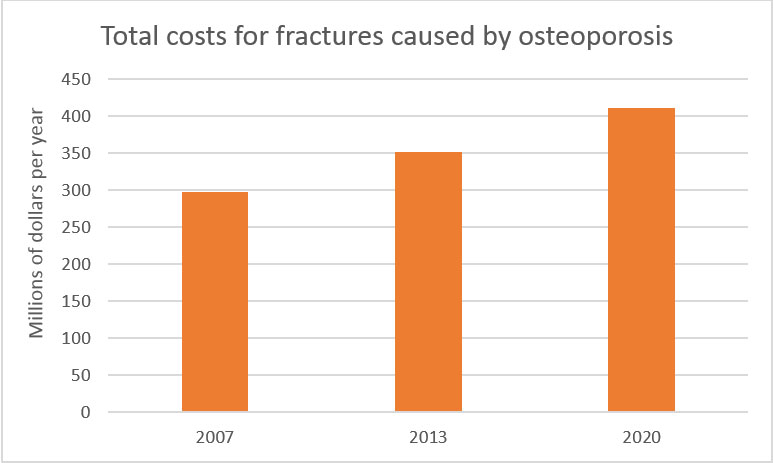 One of the important findings of studies on the incidence of fractures in populations of many countries is that fracture begets fracture. Those people who have suffered a first fracture caused by osteoporosis are at double the risk of suffering second fractures, as compared with their peers who have not broken a bone.

The International Osteoporosis Foundation (IOF) has described this as a fragility fracture cycle. The graphic below shows how osteoporosis can progress from causing a wrist fracture in the 50s, to fractures of the spine in the 60s and 70s and, finally, hip fracture in the 80s. 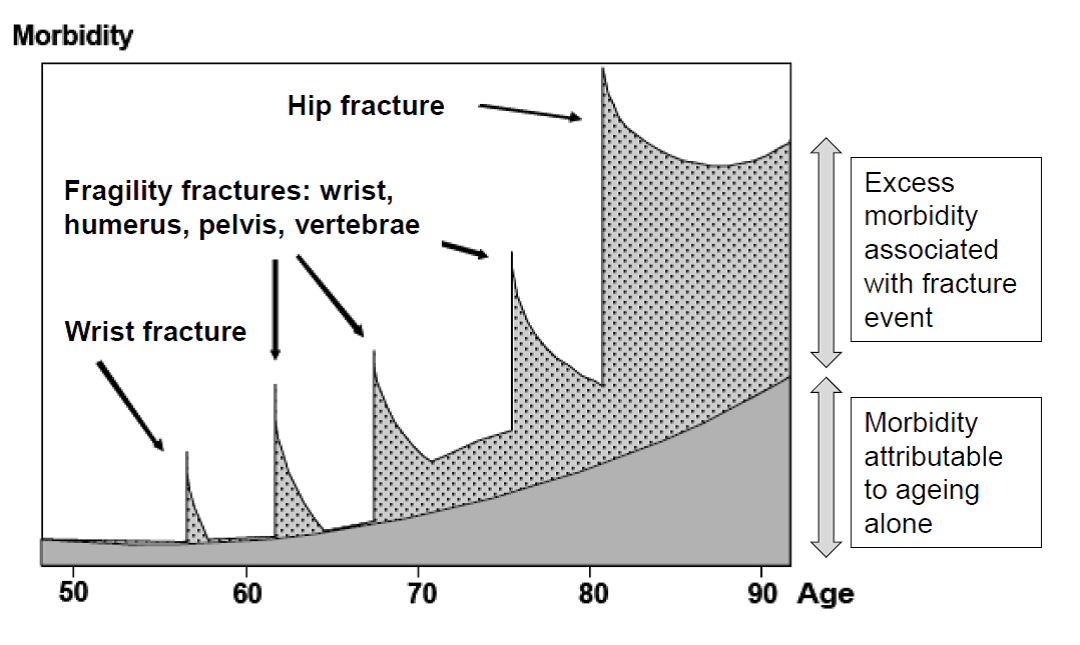 *Morbidity in this context means suffering symptoms associated with disease states. Hip fractures usually have the most significant adverse impact on sufferers

Given that half of hip fracture patients will suffer a previous fracture before breaking their hip, it is absolutely essential that, whenever a person (male or female) aged 50 years and over suffers a fracture resulting from a minor fall or bump, they undergo an osteoporosis assessment. Such an assessment can enable modern medicines to be used to prevent future fractures, including hip fractures.

Studies from several developed countries suggest that about one in six women aged 50 years and over have suffered a fracture that has resulted in them seeking medical attention. For men, the proportion is lower at around 6%. So people who have already suffered fractures caused by osteoporosis are a minority of the total population. However, they make up half of all the people who will break their hip one day in the absence of osteoporosis treatment and appropriate lifestyle advice.